In an effort to divulge a few more of the secrets behind the final work, at least the secrets we legally can share, we went straight to the source. Producers Robert Luessen and Jackie Ney, along with Creative Imaging Director Fedde Souverein, answered some of our questions about the making of this project creating a case study on the collaborative process.

Was it difficult to work on the project while wearing a trench coat, dark glasses and a hat? What other challenges did you encounter during this shoot?

Fedde (Retoucher): As a true professional, we know working in full outfit goes with the job! We just had a few odd glances from our other colleagues here and there….

Besides this, one of the challenges was to have everything look adventurous without it looking too creepy or gloomy, since it also had to appear kid-friendly. We also wanted to make sure that the scenes told enough of the story, so that even though the people just wore everyday clothing, it still worked as an exciting shot.

Robert and Jackie (Producers): You’d be surprised what we can get done while we’re undercover. Really a good producer is much like a good spy, you need to have eyes and ears everywhere to run a shoot well. Aside from sniffing out any potential double agents, from our perspective, there really weren’t huge challenges to overcome. I think that’s due in part by building a great and capable team of co-conspirators to bring this shoot to life. 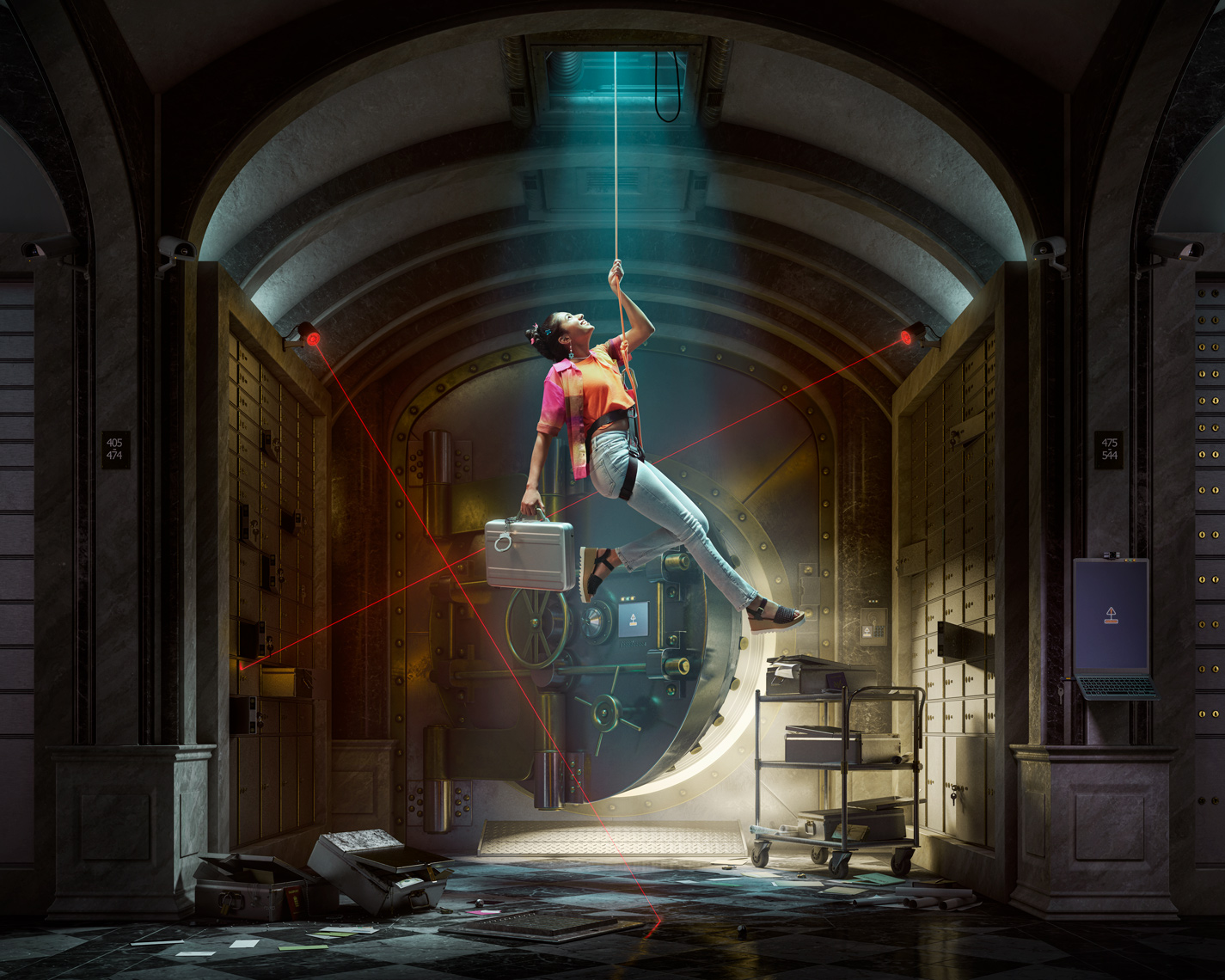 How did these images come together? We are willing to run your answers through a cipher.

Fedde: We knew that there were three different scenes set in three different time periods each with a different concept and we wanted to make sure they all worked cohesively in the campaign. We started out with a sketch session in which we just designed the basics for each scene, flushing out the core setting and what the talent was doing and how they would act within the scene. This was then followed by a rudimentary 3D scene set-up to determine perspective, placement of people and overall lighting.

Once everyone was happy with the global direction, we started to detail every scene and add global colors and lighting, so that the scenes were prepared for the photoshoot.

During the photoshoot, these initial scene set-ups were then used as a reference for lensing, lighting and placement of the talent, after which Cade could do his magic and guide the people through the shots!

This also helps everyone involved a lot to visualize what the end-result will end up looking like during the shoot, especially when we quickly comp things together on set as well for a quick preview! After the shoot we went all nuts and bolts on the details and fine tuned the models, did all the texture painting and comped the three images together!

Robert and Jackie: No need to encrypt this answer as the agency, January Third, really did the heavy lifting in the concept department.  They came to Cade and NLD with 5 different concept options – all being fun and interesting in their own right.  From there they worked with Cade to narrow it down to three – the three that we officially shot.  Honestly, it was the amazing collaboration of Cade and Fedde (Luminous) and the creatives at J3 that really brought these concepts to life. 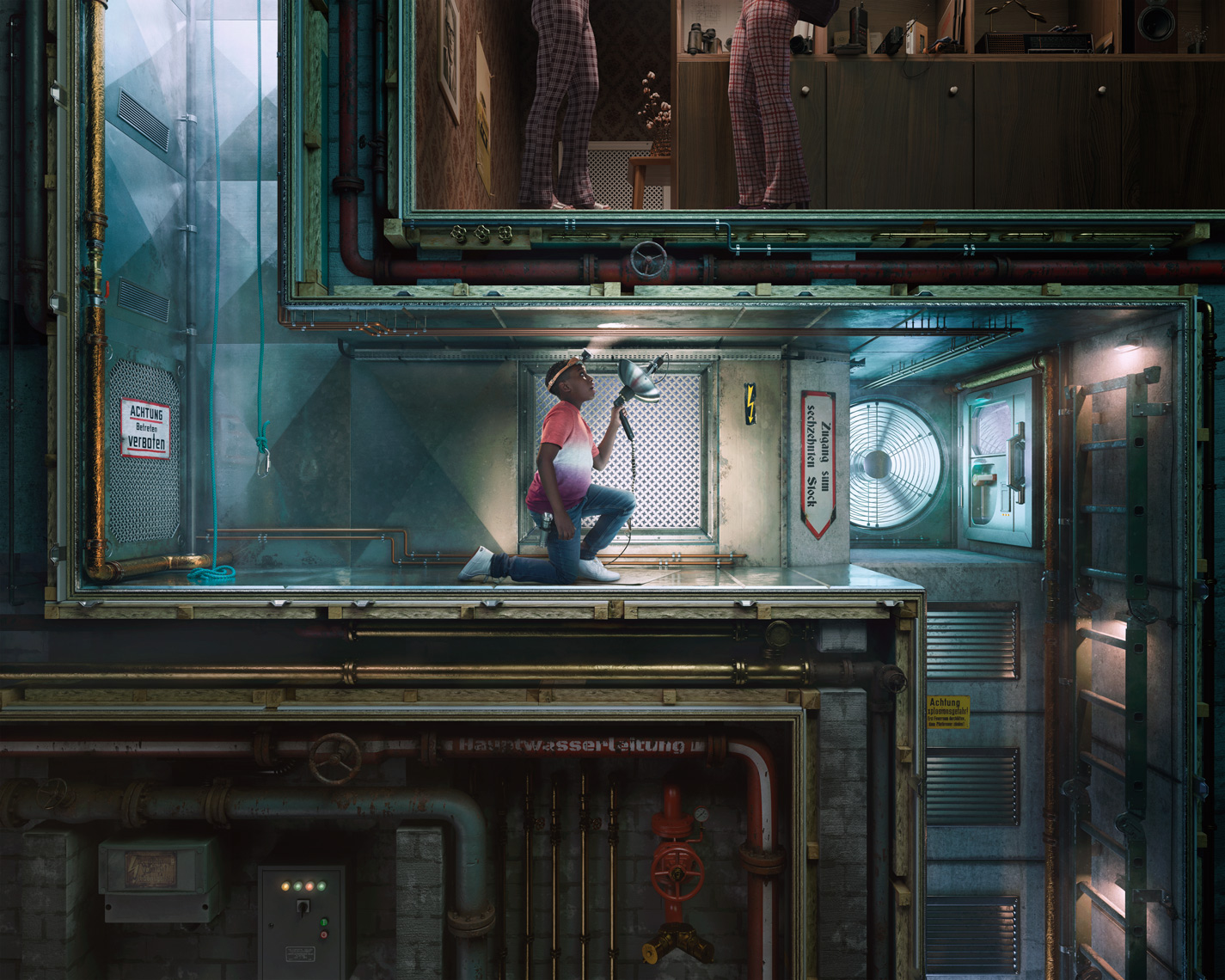 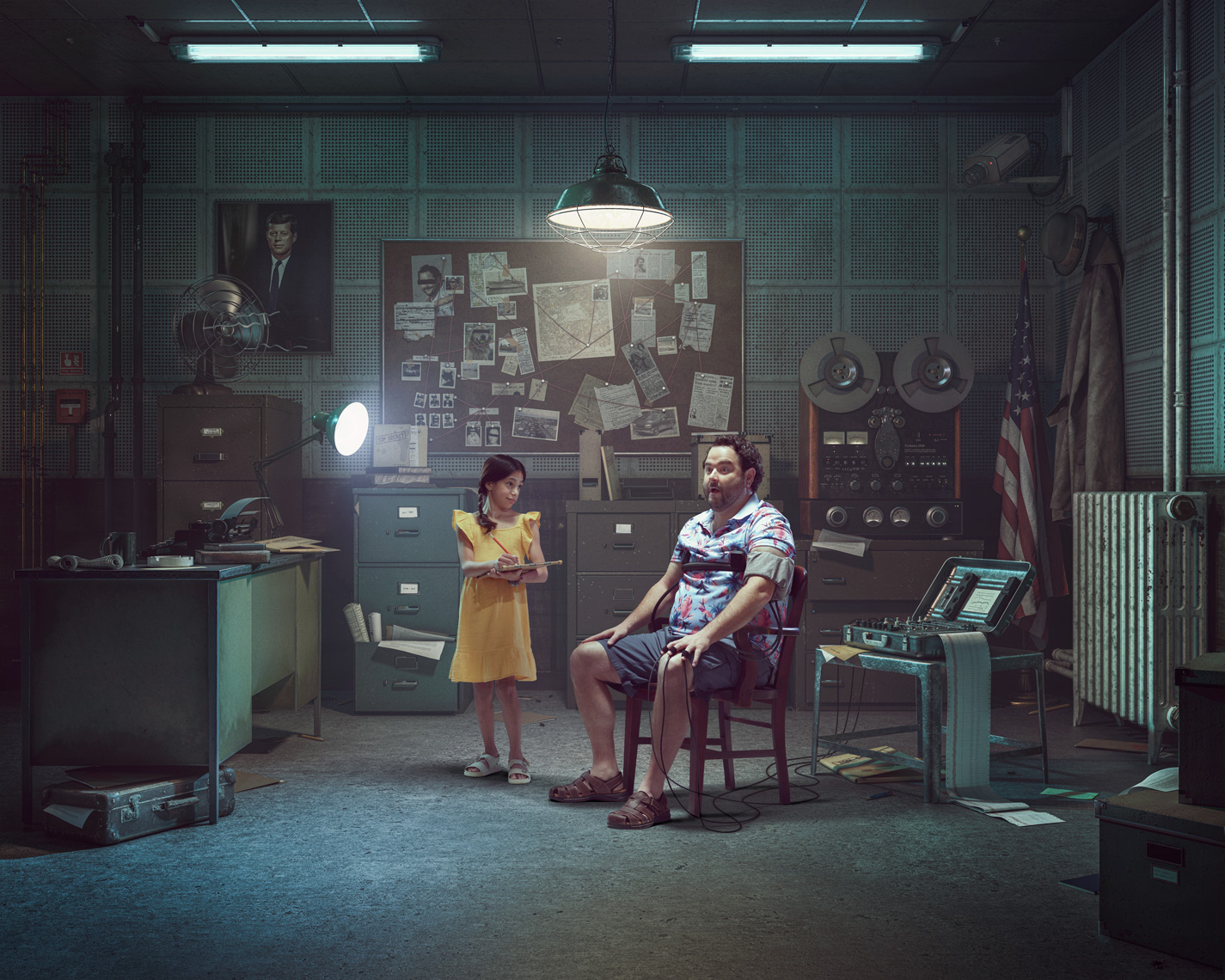 Which shot is your favorite and why? You can tell me, I’m not wearing a wire.

Fedde: Personally I am a huge X-files / True Detective fan, so I am really drawn to the Lies Detected image! I really like the mood and all the details mixed with the 60’s styled room.

Robert and Jackie: You will never be able to get that out of me! Honestly, they all have interesting details that are just unique to the individual image so it’s really hard to find a favorite. Although I can tell you a fun fact about one of the images: Producer Jackie Ney is in one of the shots! Can you find her?

Think of this as a debrief, and I’m your handler – What did you learn on the project?

Fedde: Multi colored lighting previewed in grayscale really helps to quickly determine the mood of an image and will translate well to the final image. I really can’t say more….

Robert and Jackie: That fun and play (of course safety too) can promote great outcomes.  In reflecting back, both the crew and talent were having equal amounts of fun that day.  From the rigging to the props to the wardrobe – we all watched as magic came together for each shot.

Now that your cover is blown, can you describe a memorable moment?

Fedde: When I first saw all the photography selects after the shoot! Seeing the people, how they were photographed, the way they looked and acted and therefore integrated well into the scenes, it just clicked.

Robert and Jackie: Rats! I really thought the trench coat and sunglasses would be a good cover.

This is one of those shoots that I would classify as high energy, deeply collaborative (from all departments) and just pure fun.  So the entire day stands out as a memorable moment.  But if I have to get specific, it would really be the talent’s excitement in playing their roles.  Hattie’s interrogation skills were no match for Max, and Divya was a daredevil from the get go; Brandon was so up for the task of eavesdropping it wasn’t hard for him to pretend. 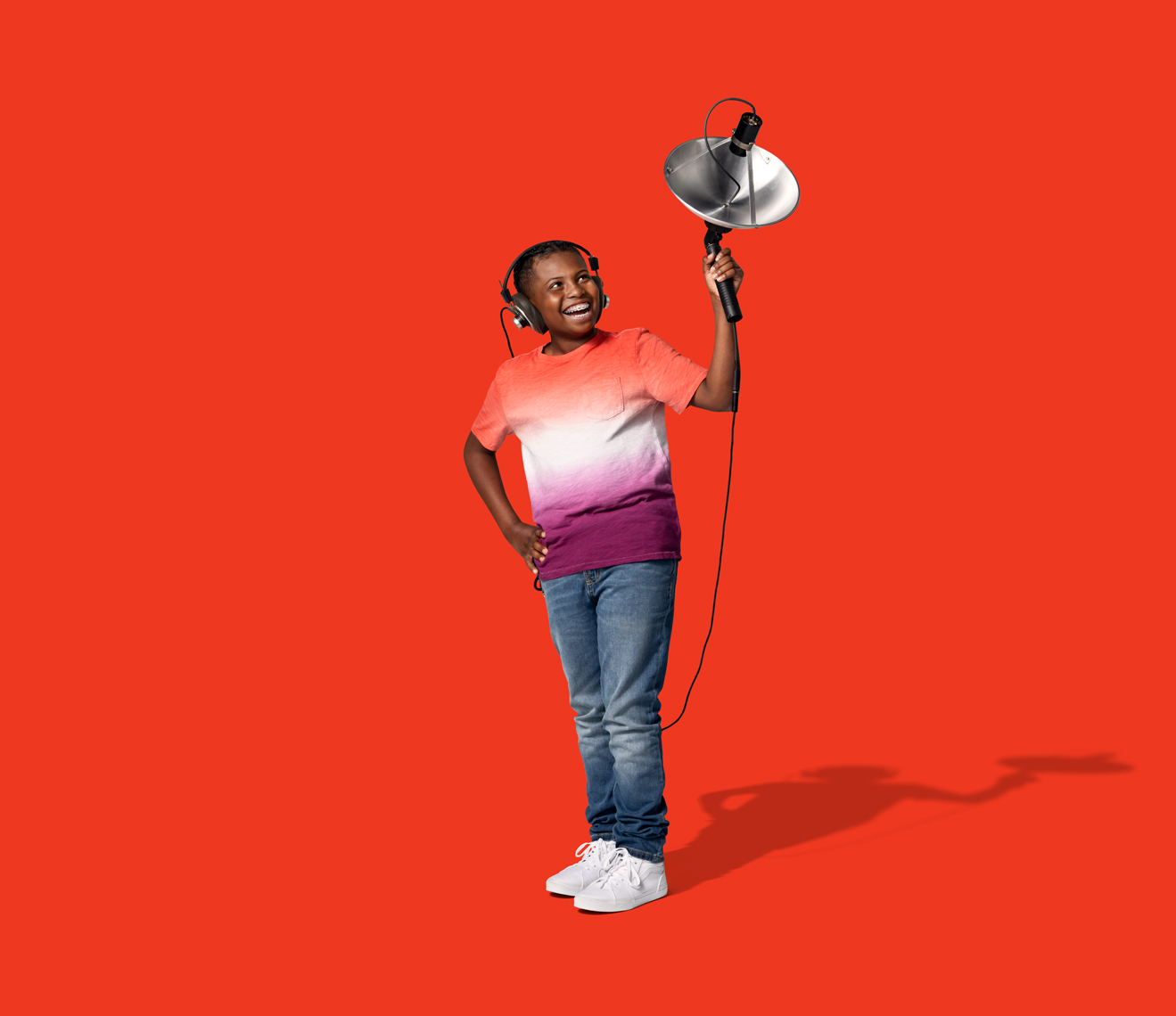 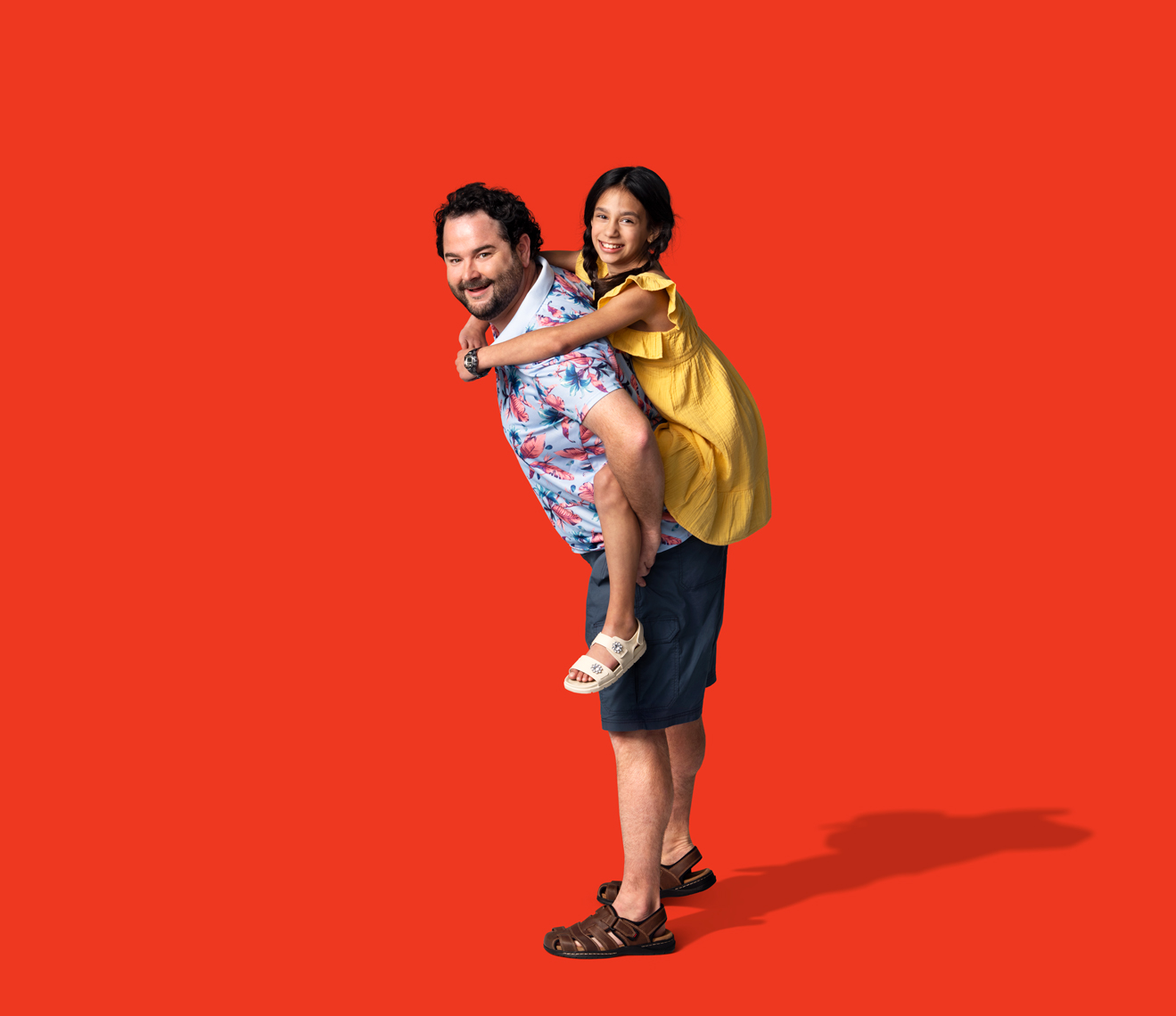 Without giving away anything top secret, what do you want people to learn about you and your work after seeing this?

Fedde: That images can also be a lot of fun and don’t have to be too serious or gloomy! Even when the setting is kind of adventurous and borders on the dark (spy stuff), the people and the setting together work well and create a very nice series of images.

Robert and Jackie: There is not a mission too difficult or too complicated or too top secret that we can’t handle.

How does collaboration play a role in your work and on this project? And how were you able to verify that your collaborators were not, in fact, double agents?

Fedde: Well I am not sure about the whole double agent thing but teamwork is everything! I think these kinds of projects work best when everybody contributes to the creative flow of the project and adds a little something to the mix. Starting with the concept and ideas of the agency, adding a little free interpretation and exploration of the Cade and Luminous team, then a dash of technical prowess and experience, we finish with the whole team mixing all this together and creating three fantastic images…shaken not stirred!

Robert and Jackie: I can say that working with January Third, Cade, and Fedde was truly a collective collaboration. Equally the individual crew brought so much fun and personality to this project as a whole that it really was all hands on deck.  I think that when you get to work on a project that is highly creative AND also work with amazing people – it really shines through in the final product.

As far as double agents go, I’d still argue that producers and spies have more alike than one would think – Ian Flemming said it best in the opening pages of Casino Royale (although he could have been writing about any production we’ve encountered): “He was a secret agent, and still alive thanks to his exact attention to the detail of his profession.”